An unprecedented event requires unprecedented vision in the digital age, and what better way to celebrate the beauty of our Ancient Egyptian heritage with a uniquely beautiful yet simple idea to unite all Egyptians on this historic day? That’s exactly what we did at Icon Creations. As a market leader in digital, we couldn’t be prouder of our significant contribution to this historical event that took place on April 3rd 2021; the Pharaohs Golden Parade (موكب المومياوات الملكية‎).

As the world watched in anticipation of the once-in-a-lifetime event, all eyes were on Egypt as the country announced its preparations of epic proportions to pay homage to our Ancient Egyptian ancestors. The remarkable Pharaohs Golden Parade set out from the Egyptian Museum in Tahrir Square to reach its final destination at the National Museum of Egyptian Civilization, where the majestic march was comprised of 22 royal mummies that date back between the 17th to 20th dynasties. Featuring 18 kings and 4 queens including the mummies of King Ramses II, King Seqenenre Tao, King Thutmose III, King Seti I, Queen Hatshepsut, Queen Meritamen the wife of King Amenhotep I, and Queen Ahmose Nefertari, the wife of King Ahmose I.

The global hype was real, and our expert team at Icon Creations collaborated with the Ministry of Tourism & Antiquities and Experience Egypt to commemorate this unique event by creating a simple yet highly effective idea; a Facebook frame for profile pictures. 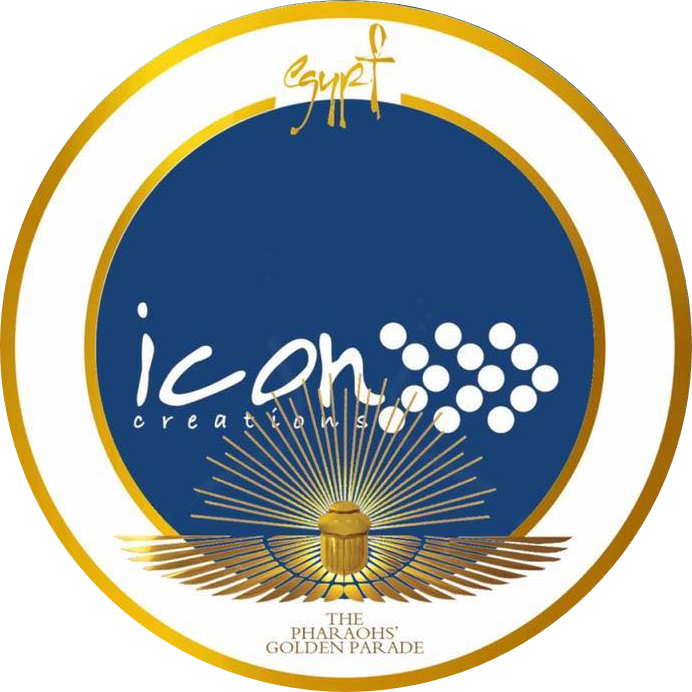 The iconic Facebook frame was published on Facebook 2 days prior to the event, and in less than 24 hours it became a viral sensation that made a clear and undisputed impact on the leading social media platform!

Egyptians started using the chic yet expressive Facebook frame for their profile pictures around the world, and soon after even their non-Egyptian friends caught on to the trend and applied to their own profiles, as they livestreamed the epic procession of the Pharaohs from the comfort of their devices.

The frame’s charm was enticing and its impact went viral… fast!

A significant number of Facebook users rushed to apply this symbolic frame on the profile pictures on parade day, and the widespread appeal saw prominent local & regional public figures, celebrities, and even brands embraced the Facebook frame and applied it to their profiles or business pages, all in solidarity with the rich history and impressive legacy that the Ancient Egyptian civilization has gifted to the world.

Several local and regional media outlets published articles about Icon Creations’ tremendously impactful and timely idea, and its widespread contribution to the global fame of the Pharaohs Golden Parade.

Facebook users today can easily find Icon Creations’ iconic frame by simply tapping their profile pictures, selecting “Add Frame”, then searching for Egypt Pharaohs’ Golden Parade in the search field. Check out the original Facebook post that started it all.

The Facebook frame not only helped to raise world awareness on the monumental event, but it also garnered somewhat of a cult following since then, as Egyptians are still using it for the profiles even today! This digital phenomenon has even extended its reach to contribute to the thriving Egyptian tourism sector that has been on a roll recently with several advancements across the nation.

We couldn’t be prouder to have come up with this ingenious idea to pay homage to our ancient ancestors, and we simply cannot wait for the next big opportunity to present itself for us to be there for you; the Kings and Queens of today without whom we could not have achieved this legendary milestone.

Check out what the media had to say about our iconic Facebook frame: 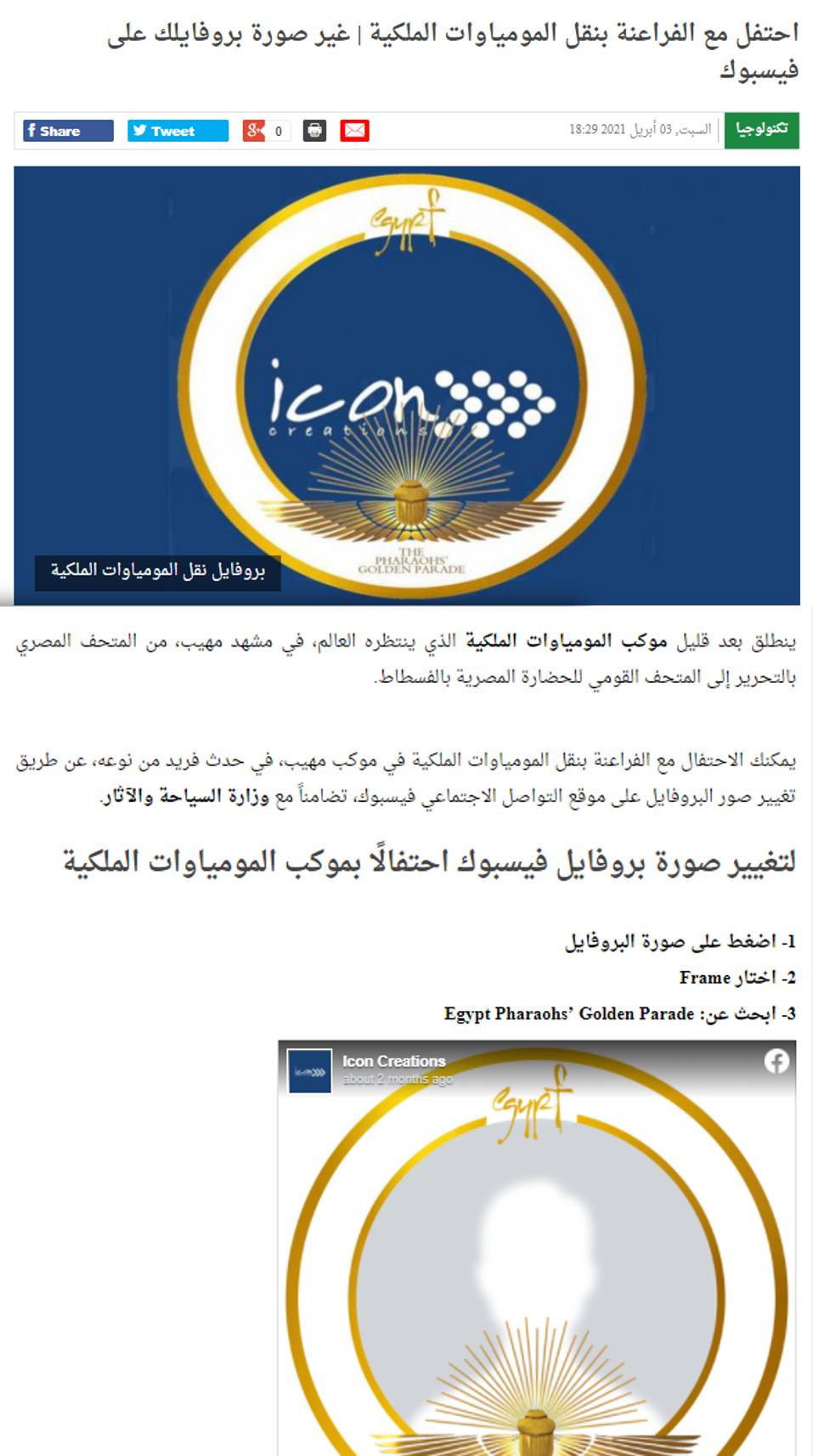 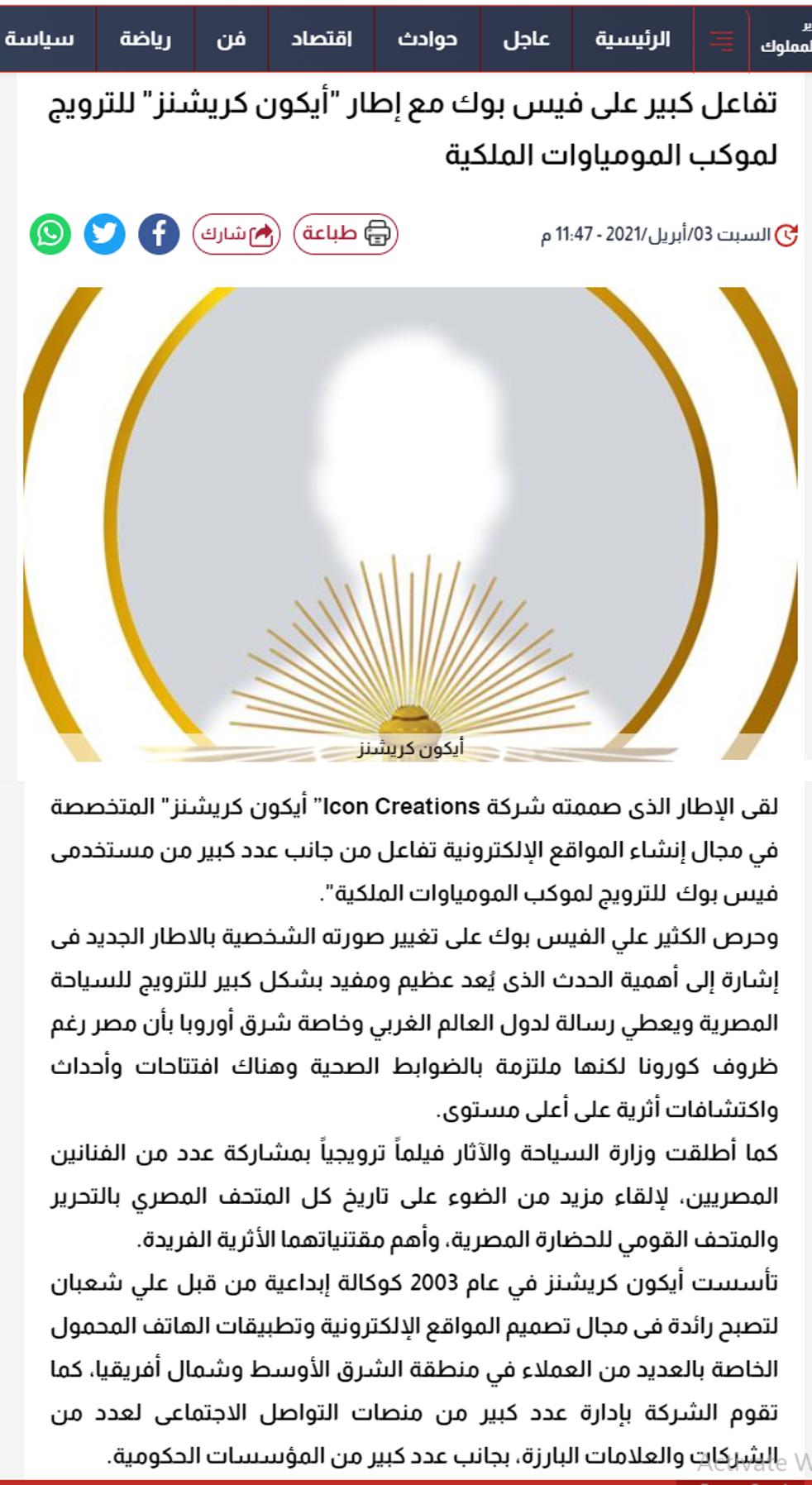 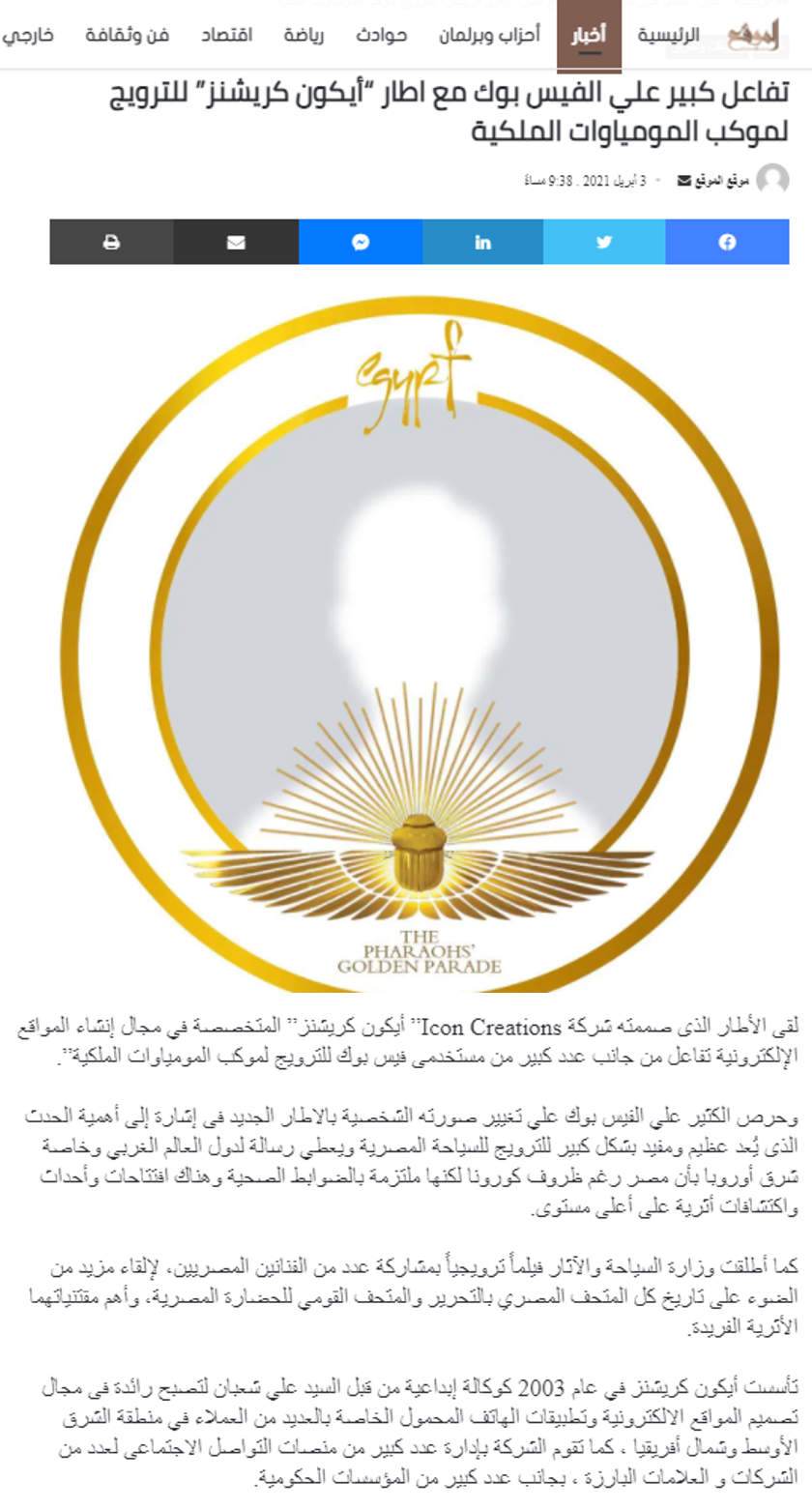 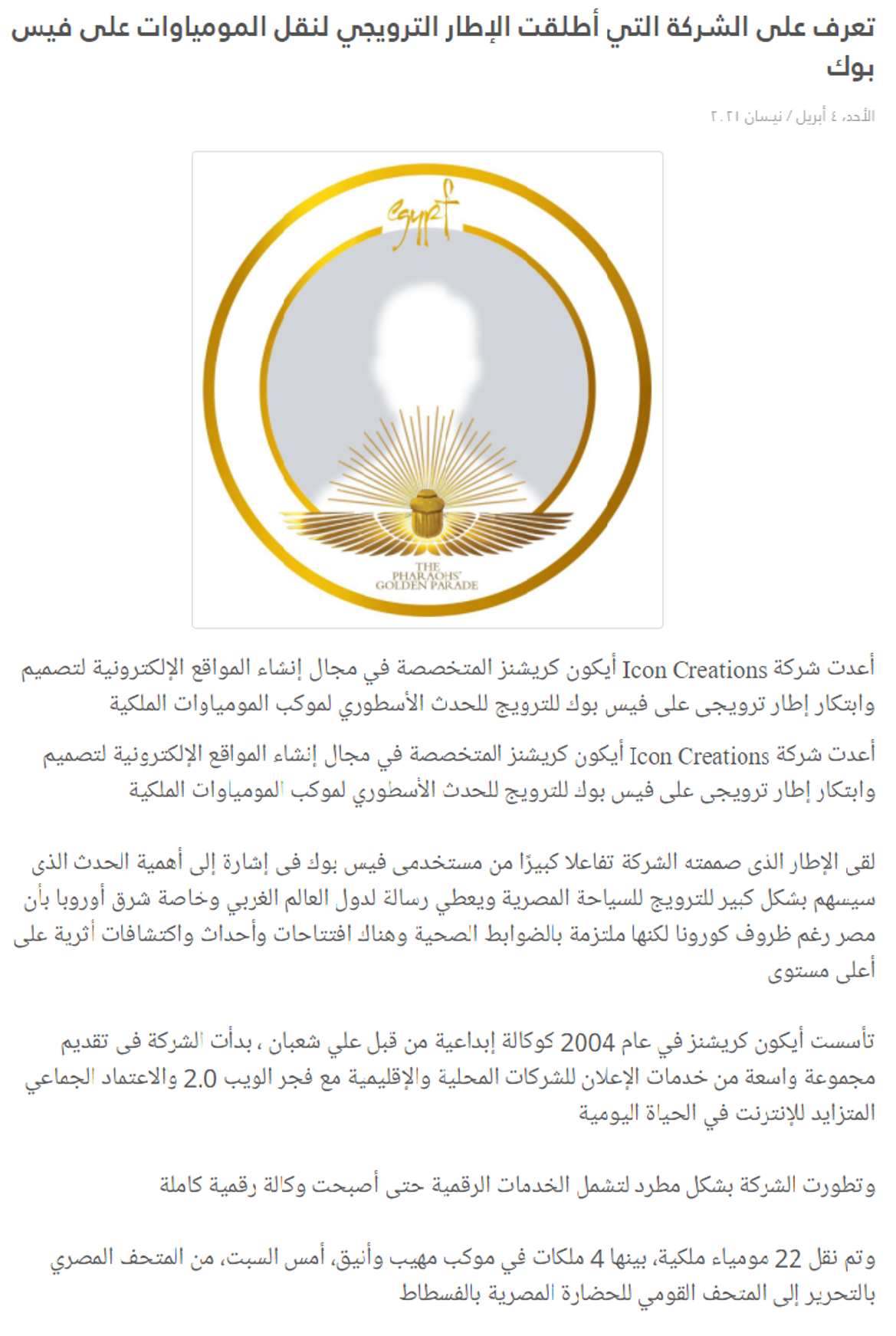 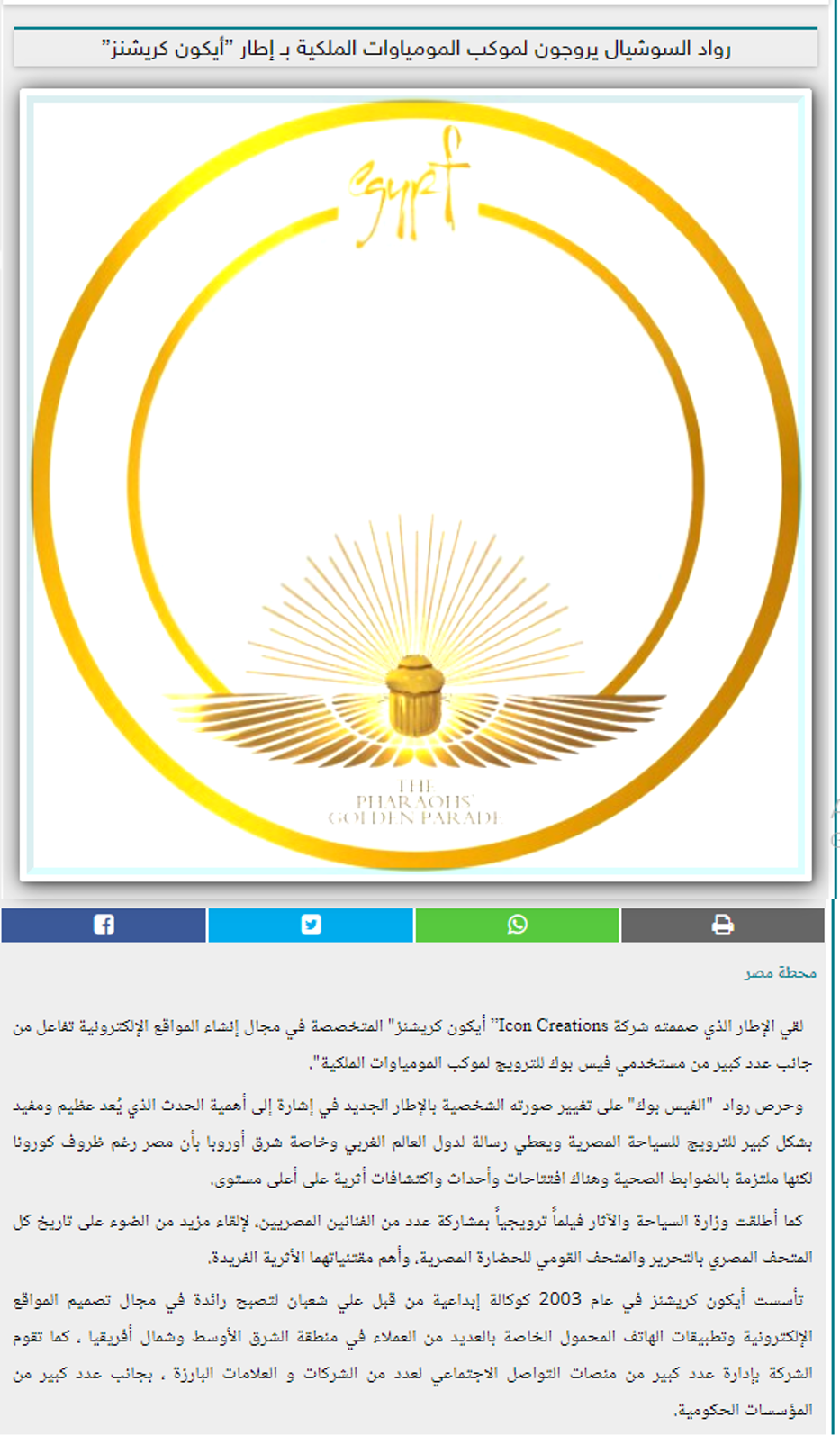